The store will not work correctly in the case when cookies are disabled.
Account
Settings
Language
english 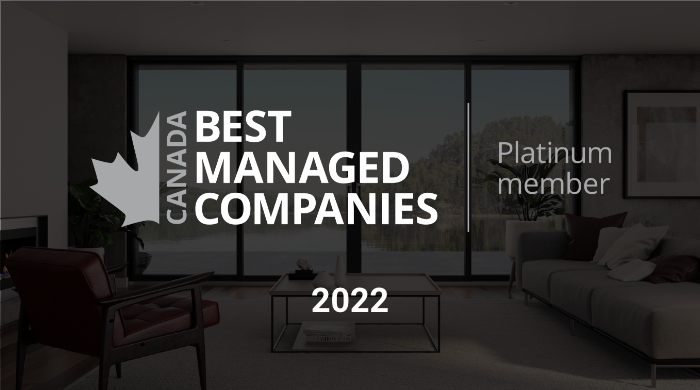 Sainte-Julie, Québec, May 11, 2022 – Novatech Group is being honoured for the seventh year in a row by Canada’s Best Managed Companies and is now a Platinum Club member of the prestigious awards program.

The company has received this major prize for its overall performance and sustained growth every year since 2015. Novatech Group earned this distinction by skillfully communicating its purpose, vision, mandate, the relevance of its business model and its corporate strategy. In recent years, the manufacturer has completed a series of strategic acquisitions that have seen the company expand significantly and become a major player in the window and door industry throughout North America.

“For Novatech Group, the Platinum Club membership highlights our team’s outstanding performance and underscores its professionalism. As we are celebrating our 40th anniversary this year, this prestigious designation reinforces our continued effort and our employees’ commitment to the success of the company. I take great pride in it,” affirms Mr. Harold Savard, President and CEO of Novatech Group.

In 2021, Novatech Group acquired two patio door production sites, one in Québec and the other in Ontario. Now with seven such production facilities, the company has solidified its standing as the most prominent Canadian patio door manufacturer. Novatech has recently invested over $50M to modernize equipment and automate operations to increase production capacity at its manufacturing facilities, while creating more than 60 new jobs.

The company significantly expanded its steel door production plant in Sainte-Julie and added new equipment, including two Intercept lines and a second sheet metal press, which will allow for a 25% boost in production. To support this growth, Novatech is also seeking to fill more than 30 positions.

Meanwhile, Novatech has installed a Velocity high-speed vertical thermo line at its Saint-Agapit site, located less than 40 minutes from Québec City. This is the first one of its kind in the Québec market and the most modern line used in the residential sector. With its state-of-the-art facilities and greater production capacity, the location also has over 30 positions to fill to support this growth.

Winners in the 2022 Best Managed Companies program were selected from among the top Canadian own and managed companies with revenues of $50M or greater. Companies receiving this award must demonstrate strategic leadership, innovation, culture and positive financial results, together with sustainable growth. The program includes four levels of awards, including the Platinum Club membership (winners that have held the Best Managed title for seven consecutive years or more). Now in its 29th edition, Canada’s Best Managed Companies is still the country’s main merit-based award program that recognizes Canadian owned and managed companies for their innovative, world-class business practices. Deloitte Private, CIBC, The Globe and Mail, Salesforce and TMX Group are the program’s sponsors. For more information, visit https://www.bestmanagedcompanies.ca

“Becoming a Platinum Club member of the Best Managed Companies is a huge achievement,” declared Lorrie King, an associate at Deloitte, and co-leader of Canada’s Best Managed Companies. “These companies show resilience, versatility and strategic acumen. They have consistently demonstrated their ability to prosper in a competitive and ever-changing market. This year’s recipients should be proud, not only of this prestigious recognition, but also of the important contributions they are making to the Canadian business community.”

Powered by Magento 2 Extensions by Mageplaza